This is the second post of a two part series on Forgiveness.  If you haven't read part one or you need a refresher click here.

Two steps left and I saved them for last.  Why?  Because they are the most important and the hardest to do.  We left off with making sure you've allowed yourself the emotions this wrong has brought upon you, you've felt them fully and are ready to move forward.

Once you've passed through all the steps the next one is to forgive the person.

If I knew how to explain how to forgive, I would.  It certainly involves all the steps we've previously discussed.  Depending on the situation it may have taken you anywhere from seconds to years to come to a place where you can forgive.  Only you will know when you get there.  The funny thing about forgiveness is it's not really about the person you're forgiving.  It's about YOU.

I believe it is our duty to forgive everyone, everything.  Yes, everything. Even horrific things. For me it is a commandment, and one I follow willingly.  It is not up to us to be the judge of some one's wrongdoings, even if they deeply impacted us. Justice will be served no matter what. Be it civil law, Heavenly law, karma, no matter what you believe, justice will be served.

If you're still having trouble with forgiveness towards someone, think of the worst thing you've ever done that someone has forgiven you for.  How did you feel knowing you'd done them wrong, made a mistake?  How did you feel when they knew?  Did they have pain in their face?  Did they cry?  Did they get mad?  Were there circumstances beyond your control that caused the hurt?  Did you get to talk through things?  When they forgave you, how did you feel?  Were you lighter?  Were you relieved?  Were you grateful?

If you've never been in that situation, I'd be surprised.  I will tell you, being forgiven for something, especially when you thought your entire world would crash down upon you because of your mistake, is one of the best feelings in the world.  Like a deep satisfying breath after a year of shallow ones. 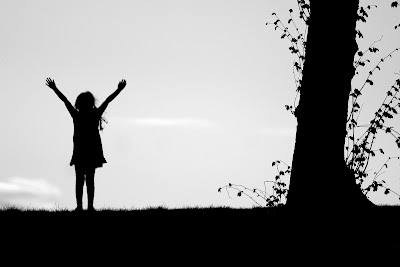 I watch my daughter's face when she's made a mistake that she thinks she is in huge trouble for.  I watch her when I react calmly and we discuss things.  I watch as she realizes that she's not going to get yelled at and sent to bed immediately.  We come up with a fair consequence, agree that she shouldn't do it again, and I tell her I love her and it's OK to make mistakes as long as we learn from them.  The relief on her face spells out the feeling of forgiveness to me.  And I am grateful for her example of instant forgiveness when I go to her and apologize when I do overreact or yell.  She hugs me and tells me, "It's OK, Mommy." Always, without fail.

The point is: find a way to forgive them.  If for nothing more than to release yourself.  Forgive everyone, EVERYTHING.  I promise it's worth it.  You will feel better.

In many cases you will let them know they are forgiven.  Sometimes it would only be awkward or even impossible to tell the person they are forgiven.  However, if someone has asked for your forgiveness, it is important that you let them know when you are able to do so.  They have put themselves in a vulnerable position and are waiting for you to tell them.  Even if it seems they've moved on, you have to tell them.  When you do, pay attention to how you feel.  You will know why forgiveness is so important.

The most important disclaimer I will make in this post is that forgetting (and forgiving) doesn't make what the person did OK.  It just means you are ready to move past it.  You will rarely completely forget the wrong done to you.  The human mind isn't built that way.  It is in our nature to store information surrounding our lives.  Forgetting doesn't mean to actually FORGET.  It means to let it go.

Forgiveness is like starting a new chapter in a book.  The story keeps going.  The older chapters will always be a part of the story.  Forgetting is remembering that the story can never continue if you keep going back and reading the old chapters over and over again.  It doesn't mean you don't remember the old chapters, just that you've recognized the wisdom in continuing forward, not backwards.

It can be a long time before your own mind can move past whatever you've been through.  You can't always control where your mind takes you, but you can control your actions and what comes out of your mouth.  In time, your mind will find new things to dwell on.  Until then, will yourself to keep the forgiven person out of it.  Work through this last part on your own and start building new chapters of your life.

A Few More Thoughts on Forgiveness

My idea of a perfect forgiveness?  When someone has done me wrong, recognized it and talked through it with me, asked for forgiveness then given me space to deal with my feelings.  When I am able to truthfully tell them they are forgiven, let it go and move on with my life.  That is perfect.  This scenario doesn't always happen.  It could be considered rare.  But I believe it to be the best kind of forgiveness because it shows compassion.  It shows love and it allows for trust to be rebuilt.

NEVER tell someone they are forgiven before you're ready.  Not only would it be lying, but that kind of "forgiveness" is beneficial to no one.  It doesn't allow you to move on and it will eventually be revisited at some point in the future.  Go through the steps, and forgive when you're ready.  If someone is pressuring you to forgive them, remind them that they need to allow you time to process your feelings and you will forgive them when you can.

If they are part of your life, try to be kind to them as you go through things.  Remember: you are not the judge and jury.  It's not up to you to punish them for their mistake.  It is up to you to do what you must to release them from it.  Repenting and paying the consequence is their job to police, not yours.

Last, there are only so many chances you can give someone. Be forgiving, but don't allow someone to keep impacting your life in a bad way. Don't give anyone that power. Ever. Forgiveness isn't cleansing if you have to keep bathing in old bathwater.  There are times where what happened was so destructive that you are forced to remove yourself from the person or situation. It is still possible to forgive and forget. But that doesn't always mean you have to keep that person in your life.Forgive, always forgive.  But don't allow it to keep happening.  As I said before, forgiveness is about YOU. Allow yourself to forgive and move past it, but remove yourself from the situation if it will cause you more harm, or if it is necessary. If it's a family member, be careful how you proceed. Rifts can be large and spread far. Make sure it is worth it.

I will conclude with a quick rundown of the steps.  Recognize, communicate, feel, forgive, forget.  Do it.  Every time.  It's worth it.

I've done my best, here, people.  It's not an easy topic, I promise you that.  I sort of feel like it's a huge jumble of words I've tried to make sense of.  I would really love some feedback.  What do you think of these steps?  Do you agree that forgiveness is always possible?  Do you disagree?  What experiences do you have with forgiveness?  Please take a moment to comment on this one.  Maybe we could have a great discussion.  Thank you!

Email ThisBlogThis!Share to TwitterShare to FacebookShare to Pinterest
Labels: forgiveness