Part of a "Blast From the Past" series...part two of our story.  You'll want to read Part One first. This post was originally published on the old blog on June 3, 2007 and can be found in the archives. 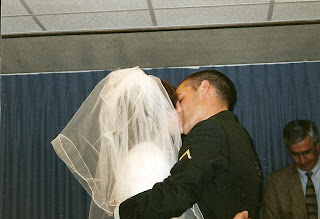 On February 8th, 2004, after spending a month and a half working, planning, and missing Matt. I set off, by myself, on the cross country drive from Albuquerque, NM to Jackson, SC to see him graduate basic training- after which we were supposed to get him settled in Richmond, VA and I would continue on to stay with Matt's Aunt and Uncle in Springfield, VA for the duration of his AIT (secondary training).

It took me four days as my family, and Matt, didn't want me driving after dark or for too long each day. I made my first stop in Dallas, TX, where a nice LDS couple (strangers) let me stay with them for the night. They fed me grilled cheese and tomato soup. The following day I stopped in Jackson, MS and stayed in a hotel with damp sheets. The third day I stayed in Atlanta, GA with a friend of Matt's Dad. He had a bubbly child and fed me pot stickers- which I had never tried before and now love.   All were very kind.

The next day I waited for his parents to fly in from Atlanta, GA. I found them at the airport and followed them the short 3 hour drive to our hotel in South Carolina. I listened to a radio broadcast of a TV show...the name escapes me. It was my first cross country trip and the longest drive I had ever made. Thinking back over the course of my trip, I listened, and sang along at the top of my lungs, to every CD I owned- twice- saw advertisements in french in Louisiana, the wide Mississippi River, and a city called Newton...while I was eating fig newtons.

Matt's parents and I arrived in South Carolina, checked into our shared hotel room and fell promptly into bed. The next morning we arose, I was so excited to see him I could barely sit still. We arrived on base and went searching for Matt. His drill sergeants were running them through a graduation practice. We would see them soon. Unfortunately, someone broke formation to talk to a family member. They were chastised and forced to drop and do push-ups, in front of their family, causing us to wait longer. Finally, they were released to spend time with us. I wanted so badly to embrace him, but couldn't because he was in uniform and it wasn't allowed.

We were allotted a few hours to spend talking with him in the gym. It was wonderful to see him, but so dictated and very difficult. After what seemed like minutes, we had to go. The night was restless. Morning came and we prepared for his graduation. It was cold and overcast. We sat in the bleachers and watched the ceremony. I remember feeling so proud of all he'd accomplished so far...and waiting impatiently for it to be over so I could see him.

After graduation the soldiers were released for the night. Once we got in the car and got off base, we were finally permitted to embrace, it was the best hug ever. We went back to the hotel where Matt's parents left to give us some "alone time." Afterwards, we all went to Texas Roadhouse and ate a big meal. Then we took Matt back where he would sleep, then catch the bus with all the soldiers headed to Richmond.

The next morning, Matt's parents left early to catch their flight home. I slept in a little, checked out of the hotel, and was on my way to Virginia. When I arrived at Fort Lee, I didn't know where Matt was, or where I could find him so we could spend our weekend together before I headed to Springfield. It was Valentine's Day. He had called me once from his bus, but I hadn't heard from him since. I parked in a hotel parking lot on base and waited- for hours. Finally, I decided to try and find his company.

I drove all over base looking for company L. I finally located the company and walked in to try and find him, and find out what was going on. I was upset, I walked in a talked to someone at the front desk and they went and found Matt for me. (They had to pull him out of a meeting.) They let him take me outside, my bawling was distracting the other soldiers, and explain the situation. I wasn't allowed to touch him except just hold his hand.

I was frustrated and lost in a strange new place and had been alone for hours. I was angry and crying and wanted to know why he hadn't been released to spend the weekend with me as I thought. It turned out, there was a miscommunication between bases. Fort Jackson said we would get time with our soldiers, Fort Lee wanted the weekend to get the new soldiers ready to begin training on Monday. I was sobbing, Matt was helpless, then they forced him to go inside. I told him I'd stay in a hotel just off base and leave the next morning to Springfield. I cried all night.

The next morning I made the short two hour drive to Springfield and entered the houseful of strangers I would spend the next few months with. I am not very good at meeting new people. I am very shy and put up a wall until I get to know people better. I spent the day unpacking with tears streaming down my face. They were kind enough to leave me alone.  Matt was supposed to get a pass every weekend to go off base and do whatever he wished. He didn't get that for two weeks.

When the time finally came, I got up early and drove down to Fort Lee to see him. We stayed in a hotel on post and acted like we hadn't seen each other in years. Best two days of my life up to that point. After the shortest time ever, I said goodbye again and headed back to Springfield. After a while we decided it would be better to drive back to Springfield each Saturday and spend our time there.

This was our schedule: I got up, got ready, drove two hours to pick him up, he drove two hours back, we spent about 24 hours together, practicing the privileges of being married, eating out, going shopping, and exploring Springfield. Then we'd leave at around 1pm on Sundays to make sure he got back by his 4 pm curfew. I would drive home alone. Traffic was evil and I was often late picking him up or late getting back on Sunday. Some days they held them late on Saturdays and I would be left anxiously waiting for them to get out. Our lives were dictated, our 24 hours passed quickly, we said goodbye too many times.

During the week I worked as a teacher for the two-year-old class at a day care center. I would go tanning, draw, read, whatever I could to to keep myself occupied until Matt could call me. He called me every night...except a couple. I never knew when he would call, my phone was my constant companion.  His extended family was wonderful to me and I befriended his cousin's (then) wife, who really helped me get through those days.

It seemed there were to be many roadblocks placed by the army. A few weeks into AIT training- Matt was training to become a parachute rigger, or someone who packs, repairs, and jumps with parachutes- he was supposed to go to Fort Benning for Jump School. (To learn HOW to jump from planes.) It was postponed 3 weeks...meaning we'd have to stay three weeks longer. When he went to jump school, I flew home to see my family. The nights he was supposed to jump, I didn't sleep. I waited for his call to tell me he was OK.

When he got out of Jump School, I went back. I saw him that weekend. The pattern continued. Luckily, I found out my best friend, Allison, was in Virginia. I was excited, I hadn't seen her in four years! She really helped me get through those last six weeks, and I helped her with a few things too. It was amazing to see her and have someone I knew and loved around during the week. It was hard to leave her when it was all over, but I was also overjoyed to be done with being away from Matt.

This story has gotten too long. I'll finish it tomorrow!

Check back tomorrow for the final installment!
Posted by Katrina Jackson on Wednesday, September 14, 2011