Our Beginnings Part One

(Since I'm moving posts over I thought it would be fun to do a sort of "Blast from the Past."  This is a three-part overview of how we met and our early years.  I have edited out some infertility content.  The full original post can be found in the archives.  This was originally posted on June 1, 2007.)

Matt is going on an overnight camping/ paint ball trip with family and friends (just the boys) and I am left home. It's funny how much you miss your hubby when he's not at home. I took him to work this morning and felt a little sad knowing I wouldn't see him until tomorrow afternoon. It seems a little silly because we've been apart for longer periods than that, but I did, just the same. In fact, now that I think about it, we've been apart a lot in our 3 1/2 year marriage. 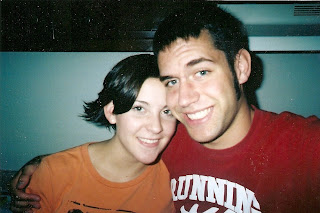 We met in August 2003- and when I say met, I mean started dating, as we were friends for quite a long time before. (Actually, he dated my sister for a brief 2 months in high school, but that's another story.) I was working as a server for Red Robin at the time and he and his family came in to eat.  I recognized him and gave him a big hug. I took their table, even though it wasn't one of mine and got their food.
After everyone left, Matt came strolling back in saying he'd lost his car key. So, I started to help him look for it. After looking for a while, I asked if he'd looked in his car. He said he'd looked all over inside (funny because it was a Jetta and you can't get into it without the key because it locks on its own- but I didn't know that at the time). Finally, he went back out and "looked" and came back shortly, key in hand. Apparently, it took him all this time to summon the courage to ask me out. I told him "yes". That was the beginning.

After dating for about 2 months, we were engaged, here in Salt Lake City, in front of the Salt Lake Temple. We planned to get married in June 2004. In November, he went off to Jackson, SC for basic training for the Army (our first separation). I was living with his parents at the time (moved there when a gas line broke at my apartments and we didn't have heat or hot water for two months...and they still wanted full rent). He was gone for 4-5 weeks and we wrote each other letters and cried a lot.

He came home on December 20th (day before my birthday) for two weeks over the Christmas holiday. We spent Christmas with my family. As we talked more and more we decided maybe it would be best to get married while he was home. (For financial reasons, and a couple we'll discuss later.) Finally, after a lot of discussion we decided to go ahead with it. This was decided Sunday December 28th. That night we took his parents over to my parents' house to tell them we wanted to get married on the 30th. (Yes, two days later.)

Unfortunately, well, let's just say they didn't take it very well. In two days I got the day off work, a dress, a cake, secured someone to marry us, got a few decorations, and called family- at least half thought I was pregnant- so they could come. It was a very nice little ceremony. My mom started speaking to me again about 2 hours before the wedding and my dad decided (seconds before I was to walk) that he would, in fact, walk me down the aisle and give me away. Afterward, we shoved cake in each other's faces, mingled with our guests, took a few pictures, and we were off to a hotel for the night- courtesy of Matt's parents.

Our wedding night was great except I got sick with pink eye and strep throat and didn't sleep a wink. The next morning I got up and went to work. Three days later, Matt went back to basic training, leaving me behind in New Mexico until February 8th. (The second time we were apart.) To be continued...

Check back tomorrow for the second installment!
Posted by Katrina Jackson on Tuesday, September 13, 2011